Behind the name ZITABL lie two artists, photographers, video artists and performers, Ablikim Akmullaev, also a musician, and Zitta Sultanbayeva, who is also an art critic and journalist. Committed artists, they have participated in numerous group exhibitions in Kazakhstan and abroad, including the 52nd Venice Biennale. In the series Eggheads, the artists use their own family records where they mask some faces with an egg, symbol of life in their mythological archetype, but also evocation of “Soviet incubator” for almost a century erasing all individuality. 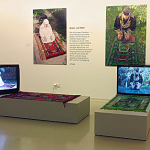