Born in 1985 in Aktobe, Kazakhstan. Lives and works in Almaty
Initially trained in painting and sculpture, Bakhyt Bubikanova also developes a performative work which can be seen in her videos. She depicts them in situations with high emotional power, if not violent.

Bakhyt Bubicanova’s work polls cultural change at the time of globalization. As a young artist from Kazakhstan, she experienced a fast developing country, torn between respect for traditions and adaptation to the Western model. Without nostalgia nor condemnation, these works draw attention to the promptness of these transformations and the threats they represent. Her paintings address the issue of anxieties bound to prompt or undesired mutations as well as violence of the modern industrial societies. Bubicanova is closely interested in the future of the nomadic traditions, crafts, sence of transcendency and honor or the relationship with nature. A Muslim rosary “made in china” or desacralized ornaments are, among other examples, symbols of a culture that is cutting off its roots, at the risk of losing its identity. With the will of raising public awareness on contemporary civilization breaks, as a visual artist she develops a poetic and protean cosmology, marked by its commitment to a duty of remembrance.

In the Suncatcher project, Bakhyt Bubicanova is focused on the issue of the nomads. Kazakhstan, whose history is linked on the exodus and the migratory movements, is today the theater of a profound change in the ways of living of their people, often forced to sedentary life. The mirrors reflect the image of the viewer by rooting him in his environment, a symbolic reminder of the natural element that he is sacrificing. Spear-shaped, in reference to the traditional weapons of the nomads, these mirrors are also an open window on the past, a time when man and nature lived in harmony. By the same perspective, the work also pays homage to martial traditions, this rich but endangered heritage. Red and yellow use the same warfare codes, resurrecting the phantom of riders and Kazakh heros, whereas Europeanization is promoted as a guarantee of peace. Both iconoclastic and reverent, the Suncatcher installation invites us to contemplation and reflection, travel and social critic. 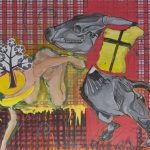