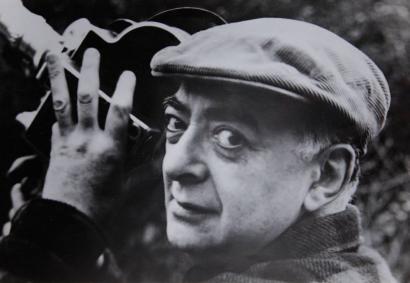 Before becoming a photographer,Halasz dit Brassaï Gyula paints, sculpts and writes. It is only in 1926, two years after his arrival in Paris, that he learns the basics of photography through contact with another Hungarian immigrant, André Kertész. The cityscapes and views of lowly social classes, as well as the poetical realism which will form the basis for Brassaï’s celebrity, doubtlessly owe much to the lessons of the latter.
Quickly integrated into the cosmopolitan, artistic milieu of post-war Paris, Brassaï mixes with artists and writers, frequents Montparnasse, associates with the Surrealists, with Jacques Prévert. He collaborates with numerous magazines such as Minotaure, Verve, Réalités and Harper’s Bazaar, photographs nightlife, graffiti and the sculptures of Picasso, to whom Brassaï will owe inspiration for the series Transmutations, realized in 1934-35 on the basis of engraved photographic plates, a particular manner of renewing the genre of the glass negative. The friendship linking the two men finds expression in the appearance in 1965 of Conversation avec Picasso, one of several works including Paris de nuit (1932), Graffiti (1961) or Les artistes de ma vie (1978) which contributed to making Brassaï well-known far past the borders of France.