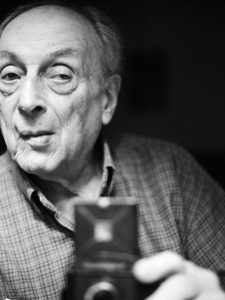 His real name being Laslo Elkan, Lucien Hervé arrives in France in 1929, where he first focuses his attention on fashion drawing and on painting before turning to photo-journalism in 1938; he works at that time for Marianne-Magazine and Vu. His photographs of architecture make him famous after the war: geometrical framings, low-angle shots… his style recalls Russian Constructivism; he plays with lines and architectural volumes, makes use of contrasts between light and shadow for compositions aiming at abstraction. A photographer attracted to Le Corbusier, all of whose construction-sites he will follow from 1949 to 1962, Lucien Hervé also covered the works of other great architects such as Breuer, Oscar Niemeyer, Aalto, Prouvé…

IN THE FRAMEWORK OF :
The Benefits of Emigration
Hungarian photography from the Nicephore Niepce Museum