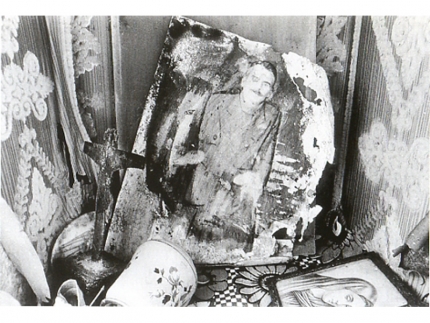 Dimitris Tsoublekas, from “Notes on Leonardo”, 1994

Image and Icon, which included the work of 44 photographers between the ages of 25 to 55, was the first survey exhibition to examine in detail a fascinating and still relatively unfamiliar facet of European photography.

The decisive factor behind this development was the foundation of the Photography Center of Athens (PCA) by five young photographers in 1979.
In its first three years, the PCA exhibited work by virtually every Greek photographer of significance, as well as many foreigners including Sebastiao Salgado, Joan Fontcuberta and Martin Parr.

It must be stressed that “New Greek Photography” was never a monolithic movement, still less a formal school with common aesthetic characteristics, nor did it ever attempt to impose a particular style. The unifying factor has been a view of the photographic medium as a discrete subject of study and practice, whose significance is emphasised by the majority of contemporary visual arts theories; to a greater or lesser extent, it accepts that the photographic image is a complex construct capable of many interpretations.

Perhaps the most important consequence of the original movement was the appearance of a new generation of younger photographers in the late eighties, some of whom began producing work independently of the PCA, while others had been taught, or at least influenced by, their immediate predecessors. This ‘second generation’ was duly followed in the mid-nineties by a still larger group of promising young photographers, the great majority of whom have been educated and trained in Greece.The three ‘generations’ of Greek photographers to emerge in the twenty years since 1979 are paralleled by three very broad categories of photographic practice into which their work can be divided – categories which of course display a considerable amount of overlap and which coexist quite happily.

Image and Icon was divided into three parts which corresponded roughly to these practices. The first, “The Exploration of Place”, covered the general area of representational photography, the second, “Reading the Medium”, dealt with photography’s technical and conceptual specificities, and the third, “The Artistic Dimension”, examined those works which intentionally or by their nature belong within the wider context of the visual arts.

The exhibition has been completed by the edition of a catalogue (English).