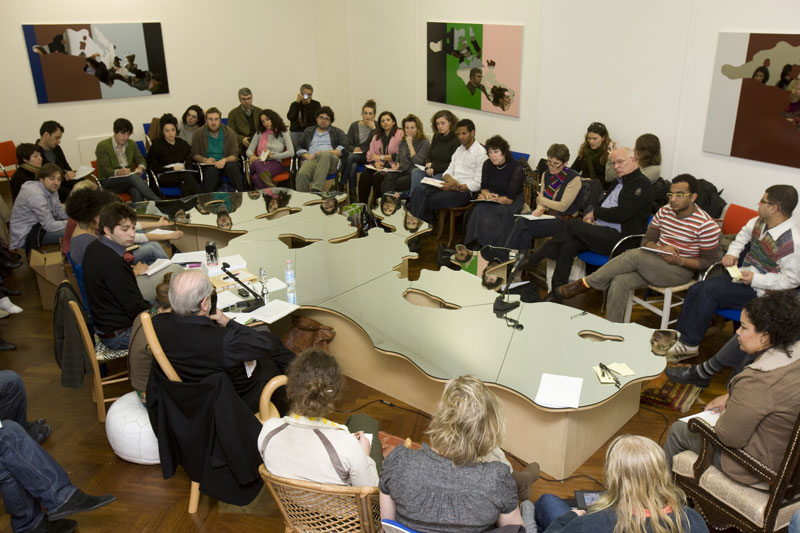 On the occasion of the Conference on “Intercultural Dialogue : utopias and situations”, to be held in the Palais du Rhin by courtesy of the Alsace Regional Department for Cultural Affairs (DRAC) and with the support of the Council of Europe and the Strasbourg Italian Cultural Institute, Michelangelo Pistoletto will present his scheme to create an InterMediterranean Cultural Parliament. The presentation will take place around his artwork entitled “Love Difference Table”, a mirror-table in the shape of the Mediterranean. For several years the Italian artist has been working on art co-operation and the means deployed to implement this particular way of helping European citizens face their social difficulties in different political situations.

Three continents meet together around the Mediterranean Sea, an area of historical mingling and cultural diversity but also the scene of conflicts. The specialists attending the conference will put forward their various assessments and proposals for facilitating the movement of artists between the Meditarranean countries and those of Europe, while improving working conditions through concrete projects involving sustainable development, respect for minorities and cultural specificities and the promotion of dialogue between people by means of art exchanges.

The debates, to be introduced by specialists in cultural activities, from the private and public sectors and European institutions, as well as artists themselves, will endeavour to define the objectives and means of intercultural dialogue in Europe, and more particularly around the Mediterranean, and to put forward new proposals for art and cultural projects based on direct co-operation between organisational structures at all levels and artists.
The debates will be chaired by Daniel Riot, journalist and director of RELATIO, website specializing in European affairs.
Two-way French-English interpretation will be provided for the entire proceedings taking place in the meeting room of the Central Commission for Navigation on the Rhin, in the Palais du Rhin.