Rethinking the democracy in favor of the youth necessarily involves the usage of new tools for citizen relationship and new participatory methods. One probable way that we want to elaborate and examine in this « lab » is the involvement of the young citizens into artistic processes that act and inspire the evolution and the mutation of the City.

A path that opens unsuspected perspectives on the insertion but also on the professionalisation, which seem to be two essential steps to implement new models of employment creation.

First, the one of Colmar,  which thanks to Mission locale, permitted to implement and achieve this osmosis between the education of youngsters, creation of a contemporary piece of art and the development of an urban area of Colmar.
And then the example of Strasbourg, that began experimenting a creation of a participatory work, by the artist Gaisha Madanova, where youth take part in determination of the form of the artwork but also of its urban location and its social integration in the neighborhoods of Meinau – Neuhof. All this through exchanges and dialogues between people and artists, operators, trainers, enterprises … and local elected officials.

Our goal, both for the experience of Colmar and for the operation of Strasbourg, is to perpetuate these actions and lead youngsters to learn to shape and reshape the democracy of tomorrow.

– PROXEMIE, realisation of an artwork of the artist Vladimir Skoda in 2013

– BIRD CATCHER, started in Strasbourg with Gaisha Madanova, by Apollonia 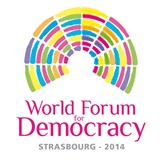