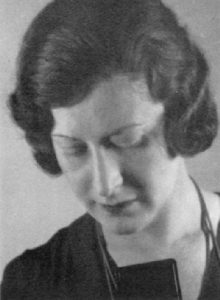 Having arrived in Paris in 1923, Ergy Landau numbers among the women photographers who, in the years between the World Wars, gained recognition from the public as well as from a professional milieu whose majority was still male. Having received training in Berlin and Vienna, she opens her Parisian studio in 1924 and becomes known through her portraits of the contemporary intelligentsia, which are widely circulated in the press. Her style is still characterized by a pictorialism (Portrait de Paul Valéry) from which she quickly turns away to espouse the principles of the New Vision: attraction to forms, objects and materials, sharpness of the image, solidity of the constructions, artificial light sculpting the forms, partial framings, daring shot angles… The utilization of the Rolleiflex allows a great freedom of movement which she turns to advantage in the numerous photographs of children. The nude is likewise one of her recurring motifs, a nude which is presented in its own terms just like any everyday object whatsoever.
Like the majority of her photographic colleagues, beyond her personal works Ergy Landau continues to earn a living by responding to commissions of companies and the press.

IN THE FRAMEWORK OF :
The Benefits of Emigration : Hungarian photography from the Nicephore Niepce Museum