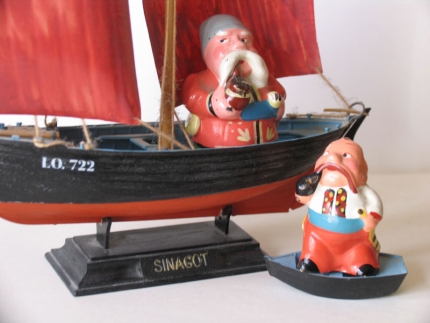 L’épongistes is a pair of artists who have once again become active since 1995. Known for its series of political and poetical maxims with regard to current affairs or the world of culture which are spread in the form of postcards, L’épongistes pratices in equal measure the performance of poetry through action and poetry in sound. It has produced objects, installations and images. Its extensive series of “found sculptures” demonstrates that everyday reality may also be perceived as a work of art. Since its creation, it has pursued cooperation with a wide range of artists in the various domains of the plastic arts, poetry in sound, performance and music.

For the exhibition “L’année prochaine, ça ira mieux !” (“Next year everything will be better!“) L’épongistes display a selection of works realized since 1995, along with new presentations arranged in the space of apollonia, but also in the street outside, extending from display window to display window. These propositions investigate the relationship of language and form to the specific urban reality constituted by the neighboring businesses and their display windows.

At the opening, there will be a performance with the participation of the musicians Christophe Rieger and Pierre Zeidler.