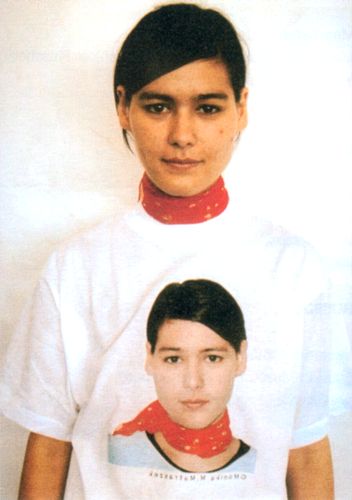 Monika Maria Matraszek is a graduate of the Ecole supérieure des Arts Décoratifs de Strasbourg, France (graduated in 1998 with the prize of the best diploma of the year). In 2002 she has been awarded a price granted by DRAC Alsace (Regional Office of Cultural Affairs). She obtained her second-degree qualifications (PhD) at the Department of the Multimedia Communication at the Academy of Fine Arts in Poznan, Poland (2004). She is specializing in multimedia and photo based art and has been involved in various projects since 1997. Her works were shown within a number of exhibitions in Poland, Germany and France.

In her photo and video based works Monika Maria Matraszek explores the questions of identity, individuality and self-expression and the ways they are structured by language and visual culture.
Within “Anne, Marie, Madeleine” Monika Maria Matraszek presents four photos selected from the broader project realized by her within 1997-2004 under the title De Visu.
The photos are big scale face portraits of different models staring the viewer directly in the eyes. Their face expression does not however give any hint to figure out what is really happening there. After the closer examination, the viewer not without the feeling of disturbing discomfort realizes that all the people look with the same eyes.
These manipulated portraits presenting hybrid person derived of their own eyes, and their subjectivity touches the questions of philosophical and psychological basis of individual identity.