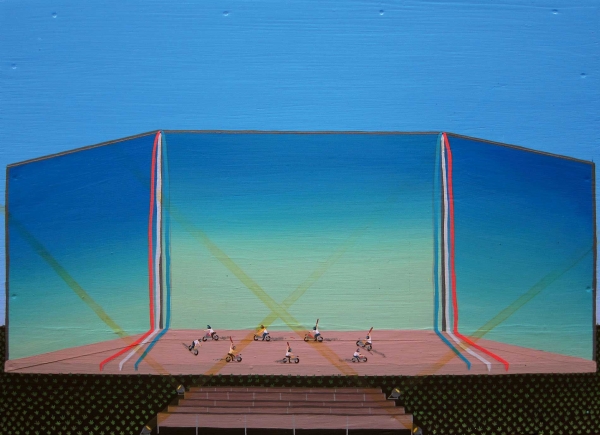 Lives and works in Brussels

Like Thomas Mazzarella I too was born in 1983; he in Charleroi, and myself in a small village in the Lorraine. I had a Sega Master System as soon as it came out in France. Plenty of American fims were on the TV. I saw images of big cities, scenes of action and violence, all this through the prism of a quite high level of unawareness. Like a little animal. The local steel industry was then well into its dying days: decay, mildew, dust outside. A smoky smell, like that of porchetta. Rust aplenty. An atmosphere that was charged and oppressive. Worlds to cultivate in the face of ours, gone fallow. But amidst this came to be born a wholly new world, a world rich in fresh and new emotions that was ours to construct. It did not then  have the  knowledge that the Internet would later provide, but cracks in the walls were there. This exit allowed to lessen the weight of the past. What passed for an autism of sorts brought about an imaginative revolution. Much has been written about this, and the story is well known. It is the story of our Western societies according to the American model. In a sense, we became what we were offered but, on reflction, it was hardly an offer at all. “We always take whatever happens to be next”, writes Robert Musil. And, yet again, just such has inevitably happened.

Today, seen with hindsight, one has the impression that generation Y has been dispossessed of its imaginary realm, and that it’s been sold at a heavy price, namely via technology. We’ve been caught in a trap, and in reality this trap pertains as well to the aesthetic domain. A program akin to a video game, running across urban landscapes, sunsets in industrial zones, concreted deserts, open-air cinemas, roof terraces and shopping galleries. And amidst all this, an organized solitude, that of heroes at home in a game platform. You can look out the window but infiity is a screen. You are in a painting by Thomas Mazzarella.
What are we to make of our existential quests served up as entertainment food ? Melancholy has found its three-piece suit. From the outset it was
already clothed in the atmosphere of those grand American architectural expanses. It intrudes everywhere and all the time. Our amnesia of the old
world has given way to a different order of spleen, a post-modern spleen. Cultivation that was formerly wild is now industrial. Kids once smeared
with soil now slick-back their hair. Smooth reigns. Gross is a pose, bad painting is a code.

Thomas Mazzarella certainly had the intuition to recognize all that. He saw what was at work there and that he’d nothing to add, opting ‘just’ to depict the scene. Humble and of faith, and wanting to believe in this mutant beauty. Hardly surprising then if the objects he produces have an
ex-voto air, taking up a ‘new primitive’ stance. Indeed, his small paintings frame the primitive existences of our own new era. Human representation
invested with the anonymous character of beginnings. His protagonists are archetypical of the surfer, the layabout, the jobless. They’re like you and me: they gather stimuli. Life is an amusement park and you’ve got the right to have several goes. Here, alienation has the whiff of strawberry vanilla. Anyone care for another little scoop? 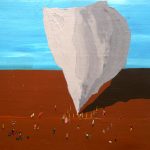 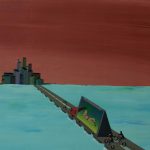 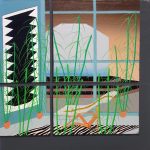