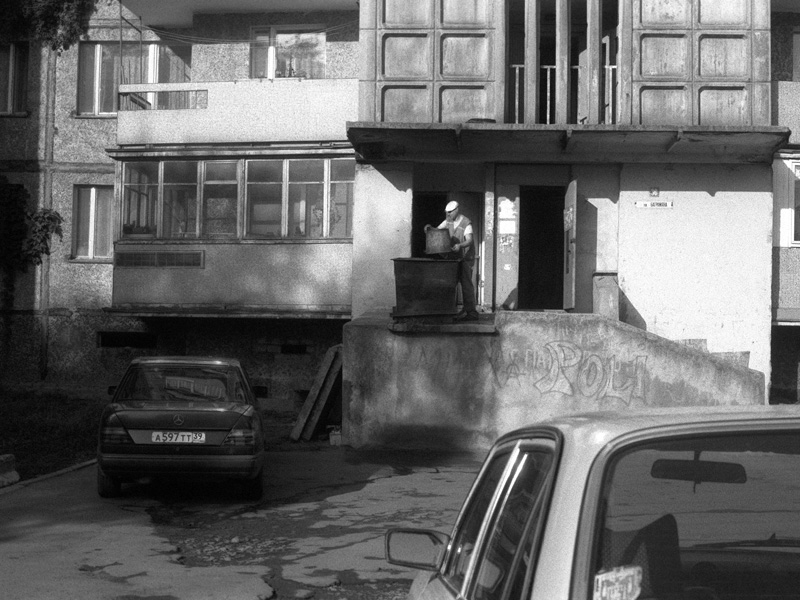 “Please, step forward to the rear!” – a conductor called out to a group of Warsaw tram passengers. Of these passangers was the philosopher Leszek Kolakowski, who used this phrase as the motto of his text, How to be a conservative-liberal socialist? which he published in Encounter magazine in the United States in 1976. At that time there were no other alternatives in Poland – you had to be socialist.

After the fall of communism in 1989, different options became available. Poland, like other countries from the Soviet block, chose a neoliberal path. However, the initial euphoria of this political turn quickly declined, after they discovered this new system also had a price. It was a shift from industrialism to post-industrialism, from modernism to postmodernism, from Fordism to post-Fordism and finally – the free market economy and capitalism. These changes often left a bitter taste…

Broadly Understood “human space” will be a topic of the Gdansk authorsphotographic exhibition. The oldest of them was the press photographer, Zbigniew Kosycarz (1925-1995). He settled down in Gdansk after WWII, at the end of the 1940s. He documented the reconstruction and transformation of the city, both in terms of daily life and important events. In this exhibition, his photographs present daily life during the time of communism, political unrest, and turmoil of the country in the 80s to the beginning of transformation during the 1990s.

The development of Michal Szlaga (born 1978) project, Stocznia Gdanska involves one place – the legendary Gdansk Shipyard, a cradle of the Solidarity movement, where the artist lived and had his studio. His nostalgic photographs are records of the neoliberal system he was eyewitness of. Since 2000, he has documented this locality – events, landscapes, and workers, as well as the changes taking place there, the results of bankruptcy of the shipyard: the decline of its typical professions, the gradual demolition and installation of industrial buildings, the overgrown weeds present, and places which were earlier vibrant with industrial and political life.

Alicja Karska (born 1978) and Aleksandra Went (born 1976) create a feminine artistic duet who expresse themselves both in video and photography. Their work documents their observations of the city space – its curiosities, absurdities, and unnoticed details. The photographic cycle The Cityproject (2008-2009) uses a model which they set up on Gdansk Shipyard: on a wet ground surrounded by puddles, they built a model of a utopian modern city using sugar cubes. This is the utopia which embodies our reality of the 1970s and 80s. We are very familiar with this vision. However, despite our humanistic assumptions of the Athens Chart, the creator of this vision, our experience inhabiting this type of architecture is rather negative. In the photographs of Karska and Went, the sugar utopia gets soaked in the rain and dissipates.

And finally a photographic cycle of the artist and curator of this exhibition, Agnieszka Wolodzko, entitled Body on the Move takes its roots from her perpetual need to travel and to move from one place to another. This practice exceeds the boundaries of her artistic work and becomes an action in itself, an addiction, a way of life. Photographs are taken as if “at an occasion, on the way”. They are created in a rush, when there is no time to adjust a camera or consider the composition of a picture. This chaotic character has its own philosophy, it stems from a wish to convey an experience and not an aesthetic reflexion. So far this cycle includes pictures from China, Russia, Finland, Japan, Romania, Ukraine and Morocco. The exhibition will present only a small portion of the collection.