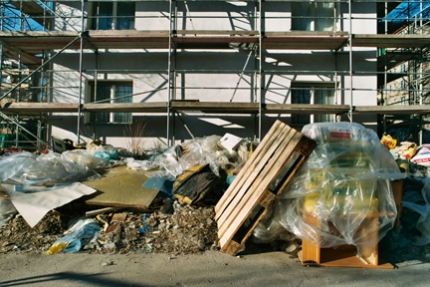 Thirty-three-year-old, Cécile Yerro-Straumann has got Swiss nationality, but she lives and works in Strasbourg. In 2003, she obtained a scholarship from the “canton Neuchâtel” to make a six months’ residence in Berlin. Cécile Y. Straumann had never been before in Berlin, and the energy and the topical context seemed to her particularly interesting. But the artist had also been attracted by Berlin for another reason : its painful past, concerning the dividing of Germany in two entities. The “Wall” is a representation which personnaly talks to Cécile Y. Straumann as she comes from Seoul.

Among the different ways of seeing Berlin, Cécile Y. Straumann chose one which, according to her, frees itself from the environnment. It is the notion of “re/building”. At every street’corner, every end of road, a building site, renovation, roadworks, scaffolds, tarpaulins. These structures give a singular aesthetic. They are like real installations. The artist points up the fact that in this context, “re/building” is really synonymous of “reunification”.

Stones, buildings, streets let see the inherent fizz of a human activity, of its ways of life… Moreover we must add that this exhibition take a large part in Cécile Y. Straumann’s project as the mobility of her works extends the idea of the bond, this time, between Rance, Switzerland and Germany.

With the support of :