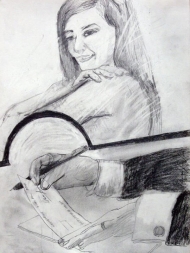 “…An artist, performer and video maker, Revesz does not, however, abandon the possibility of using painting by experimenting with it in a complex panorama of ‘access levels’, which makes the viewer uncertain as to reality and fiction, inside and outside, on the belonging of the work’s conceptual part to the retinal one, and vice versa. From the multiple models of expression the media suggests to him, Revesz takes, especially in a few 1991-93 canvases, the ability to reconcile neo-expressionist models of iconic painting with low-definition electronic images. His more recent paintings demonstrate his latent interest for figuration, resolved through chromatic lighting of synthetic and fauve ancestry.”