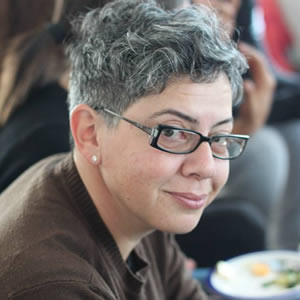 Born in 1972, Limassol. Lives and works in North Cyprus . She graduated from the Fine Arts Faculty of Hacettepe University with a first-class department and faculty ranking. She completed her master’s degree as a research assistant and returned to Cyprus in 2001.
She lectured optional sculpture courses at the Art History and Archeology Department of Eastern Mediterranean University during 2001-2003.
She is currently working on various projects dealing with visual arts (archiving, cyber museum design, web site design, organizing series of panels and talks, publications on visual arts, etc.) at EMU-Cyprus Research Centre.
Also, she has undertaken the presidency and vice-presidency positions of European-Mediterranean Art Association, which is a relatively new formation.
At present, she is the Project Coordinator, and Editor-in-Chief of the Association’s quarterly art journal.
She received various awards at local and international exhibitions that she had participated in the past.
Writing frequently, Sonya has a number of essays on art, besides her exterior projects.