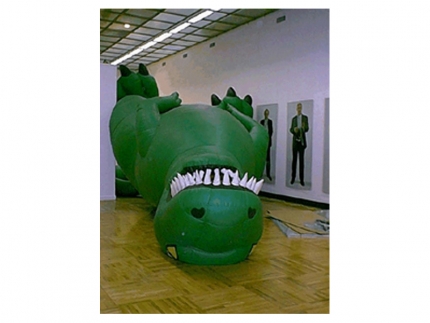 A number of young French critics, including Jean-Yves Jouannais, have identified a real artistic phenomenon in France in the nineties, that of the “mad artist” oridiot. Is their madness inspired or innocent?

We are able to grasp this dizzying desire for madness in the artistic process, and we can see this self-deceiving awareness in the person of the present-day artist. That is the theme of this exhibition, which will gather together some fifty artists, mostly French and Russian, with works from public collections of the French Regional Contemporary Art Funds and the French National Contemporary Art Fund as well as from galleries, plus other works specially produced for the occasion. The artist has long been considered a madman because he shatters models andcreates scandal by the novelty of his works; but the present-day mad artist is a new type of character, going beyond the very extravagance of contemporary art.

Since the 19th century, this typically French revolutionary tendency has characterised the very nature of the artist: battling against conventions is second nature to him. The entire history of art may be considered in this light up to the present day. Such behaviour has become standard in art; indeed it may even be considered a convention. However, the mad artist no longer identifies with this; he no longer wants to change conventions in a perpetual revolution of mannerisms; his production, his life, his methods point to an unconcerned madness, discordant to such an extent that it becomes familiar.
For the “mad artist”, the entire corpus of contemporary art represents the “supermarket” for derision; he finds there his subjects for mockery in order to produce works which lay bare not only social myths and cults but also the existential torments and metaphysical truths of the present-day world.
Yet where we are able to grasp his originality (his split personality) is in his capacity to deride his own production ñ that is his deliberate folly.
His work has to convey his expression of pure folly, so that there is absolutely no repetition of the convention ñ which has become standard in contemporary art ñ of demonstrating a style even when working with the absurd.
“He is an innocent”, says Dostoevsky in defining the idiot, because he does not seek to go against convention, right thinking and the obvious, but his terrifying attitude of simplicity and ignorance ever since exposed to auto-derision and mockery finally reveals the truth.

The “mad artist” aspires to incarnate this village simpleton who, confidently departing from sovereign reason, and knowing it, feigns ignorance to such an extent that he appears to be an idiot – a “split-personality madman” whose reasoning is simultaneously aware and naive. The “mad artist” secularises the image of the artist because he exploits the culture of contemporary art in order to mock it; in a way he denies the mystery of creation. The “mad artist”, playing the idiot, may lead us to believe in a profound modification of the image of the artist we have inherited from the 19th century.

WITH THE SUPPORT OF :