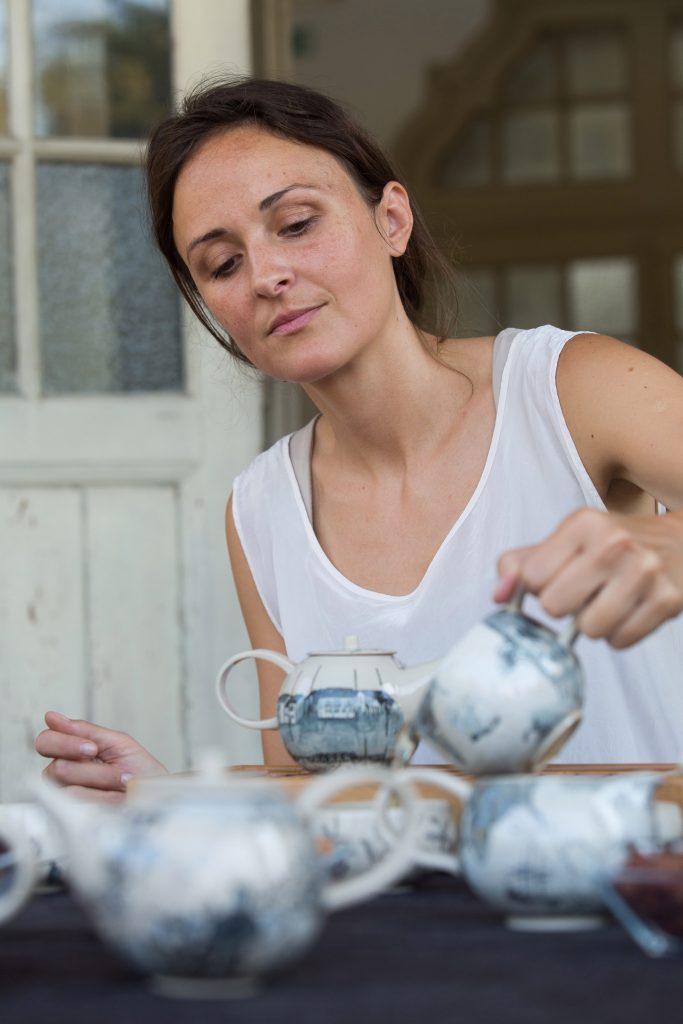 Neja Tomšič is a visual artist, poet and writer from Ljubljana, Slovenia. Since graduating in painting at the Academy of Fine Arts in Ljubljana, she has been part of several group and solo exhibitions, performing and publishing poetry and prose, among other. She completed the PhD program at the Faculty of Humanities in Koper (SI), and is finishing her dissertation on documentary cinema and related practices in the contemporary art context, especially Belgian post-colonialism.

Her visual work is based on actual historical events with the aim of questioning historical narratives. Employing extensive research and critical analysis, she uses drawing to create poetic and intimate worlds, that, when unveiled, comment and document political and social realities of today. Her project Tea for Five. Opium Ships is the result of in-depth research on the history of opiates and opioids in the United States. The work is built around five hand painted tea sets, a tea ceremony and a performance that narrates the story of 19th century opium ships. The project was presented in Ljubljana, Sofia, Azores Islands and in Sarajevo.

In 2014, Neja was awarded an ArtsLink Fellowship, during which she started an artistic collaboration with Baltimore artists Lisa Moren and Jaimes Mayhew, monumentalising erased histories in public space – the Nonument project. The following year, she also received the ArtsLink individual projects grant for the Nonument01: McKeldin Fountain project, realised at the Transmodern festival in Baltimore. The project recently received the Saul Zaentz grant for Innovation in Film and Media Studies.

As the youngest author, her drawing work was included in the Drawing in Slovenia 1945-2005 overview exhibition that toured in Ljubljana, Maribor and Zagreb. Her drawing was part of the Femicomix travelling exhibition (Ljubljana, Zagreb, Rome, Rijeka), and the International Comix Festival in Belgrade, as well as the Biennial of Independent Illustration. Her latest exhibitions include the Street Gallery by Kino Šiška in Ljubljana, and the Young Artist overview exhibition at the Gallery Veno Pilon in Slovenia. She was part of several group exhibitions, for example the Biennial of Young Art in Moscow and the Freedom Koeficient curated by Andrey Parshikov at the MGM Gallery in Moscow.

Performance is becoming an important element in her work. Her performance experience includes the 2014-15 theatre play Škrip Inc, directed by Jelena Rusjan, and the Screech Orchestra group (2011-2013) which toured widely, in New York City among other. She also created live visuals for performances of singer Katja Šulc, and performed at festivals Druga Godba, Lent, Dreams Festival and at the Recollets Center in Paris, among other.