On the years 1993-1999 Agata Zbylut studied at the Art Institute in Zielona Góra, Poland. Since 1999 her photo and object based works have been shown in a number of exhibitions in Poland, Russia, Germany and Belarus. Since 2000 she is also a curator of the Amfilada Gallery in Szczecin and active promoter of Polish- German art exchanges.

Agata Zbylut’s work can be located in the mainstream of critical art with a distinctive feminist coloring. The 1990s have introduced into the Polish artistic life a number of names and productions with a heavy critical and political load, which have left a permanent mark on the repertoire of Polish art presenting an image of the world shot through with the new sensitivity
Agata Zbylut in her work explores the issues of identity and its susceptibility of being influenced by cultural patterns.
The extreme visual attractiveness of Zbylut’s productions and their apparent naivety display their second meaning and subversive potential.
In her “Poster” series the artist actively faces the reifying male interpretation when she appears in poses and clothes promising a maximum of erotic satisfaction.
The huge, loose wedding dress from her work entitled In Excess, But Not Above the Norm and the artist’s tiny figure lost in it, clash the world of internalized values and aspirations learnt in the process of being brought up thanks to which almost every young girl in Poland sees in marriage and maternity the fulfillment of happiness and social acceptation.
Zbylut’s sweet, discretely inviting images reveal the cultural tropes of a woman’s identifying herself with an object of consumption, being submissive and accepting the lower status of a mere companion or a mirror, thanks to which the man is able to confirm his value. Those old truths learned during a lesson of feminism seem to gain in Agata Zbylut’s work a fresh visual form. 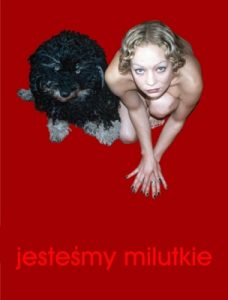