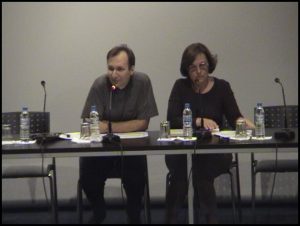 Zoran Eric graduated from the Faculty of philosphy in Belgrade, department of art history, finished the postgraduate Kolleg at Bauhaus, Dessau and is now Ph. D. candidate at the Bauhaus University in Weimar.

He develops his professional activities along three main avenues that he is trying to connect:
– Academic research into the meeting point of urban geography, spatial-cultural discourse, and theory of radical democracy. The discourse that he intends to elaborate could be coined spatioanalyssis, analysis of libidinal circuits between subject, society and space, and their political implications. He uses those theorical tools te reflect cultural phenomena, and especially art practice. He has given lectures and presented papers on this issues in Dessau, Pecs, Erlangen, Weimar, Stuttgart, Strasbourg, Thessaloniki…
– He established a programm of curatorial workshops – Professinal Standards in Curatorial Practice with a colleague Stevan Vukovic à Belgrade. The profile of this programme is both educational and projected-oriented. The last seminar / workshopCurating in Transition was held in April 2002, and the outcome will be a joint project involving 21 curators from the region of East Europe under the title The Last East European Show, scheduled for May 2003 at the Museum of Contemporary Art in Belgrade.
– In curatorial practice, he’s trying to analyse the position of artists in the public sphere, and underline ythe problems that they deal with while reflecting the contxt in which they work. He is especially interested in the work in society, politically conscious work that deals with the different contextual layers of social space and how it is produced and reproduced. He raised those issues in the projectDysfunctional Places / Displced Functionaities and in the more recent projectMigrations and Personel-Public Space.