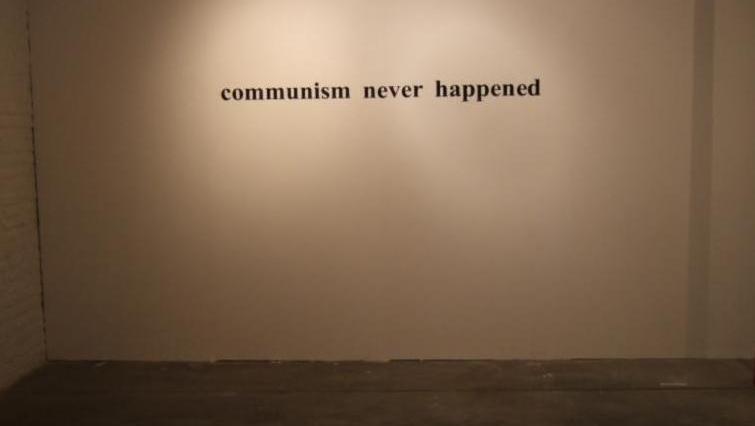 In October 2007 apollonia, european art exchanges (Strasbourg) has launched a series of events “One critic, one artists, one artwork”. On this occasion, Geir Tore Holm, Norwegian artist of Saami origin, accompanied by Helen Hirsch, art critic, has presented an exhibition “Triste Arctique” dealing with social, environmental and identity questions of Saami people.

For the second stage of this series, we invited the Romanian art critic Alina Serban that we have met during a research trip in Bucharest last summer. Alina Serban (born in 1978) is co-founding member of the independent platform for visual, theoretical and research production Centre for Visual Introspection, Bucharest. She regularly contributes to local and international editorial projects and she has most recently curated “Points of View”, Romanian Cultural Institute, Paris, “Indirect Speech”, Kunsthalle Fridericianum, Kassel, “Minimal Diversions”, Vector Gallery, Iasi. Since 2002, she is editor of Arhitext journal, Bucharest.

Alina Serban has reacted to our call for proposals by inviting Cluj-based artist Ciprian Muresan (born in 1977). The latter is co-editor of Version artist-run magazine and from 2005 editor of IDEA art + society magazine. In 2007, Ciprian Muresan has taken part in 3rd Prague and 1st Athens Biennale and has had solo shows at Kontainer Gallery (Los Angeles) and Raster Gallery (Warsaw). He will exhibit in the Statements section of Art 39 Basel in June 2008.

The meeting between the art critic and the artist has generated the exhibition “A Turn to the Real”, based on the ambivalent, sometimes controversial, associations between the experience of history and nowadays reality configuration. The title, “A Turn to the Real”, refers to core investigation of the exhibition: how to interpret the symbolic and ideological processes within history in order to disclose alternative responses to the daily social realities and behaviours? What role do the past representations play in the economy of our everyday life?

“A Turn to the Real” sets up first and foremost videos and series of drawings envisaged as a coherent installation. In his works Ciprian Muresan explores, salvages and re-contextualizes historical, social and cultural (literary, artistic) references in order to unveil the complexity of what is called Reality and/or History. The work entitled Communism never happened (2006) raises the question of consequences engendered by the evaluation of Communism and the difficulty of re-writing history. The series of drawings 1983 (2007) creates a correspondence between the images of corpses and the texts extracted from a Romanian primer schoolbook from the communist epoch in order to reveal the subjacent connections between education and ideology. Due to the montage text-image, the artist juxtaposes collective references and personal comments. Thus, the works of Ciprian Muresan serve to acquire an artistic approach that challenges the ambiguities inscribed in the collective memory.