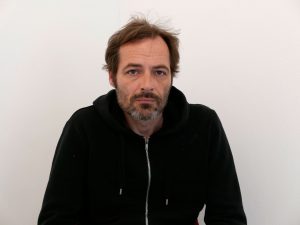 Born in Budapest, Hungary, in 1966, I started my professional formation at 20; first qualified as a teacher of drawing and geography then four semesters of Italian studies at the University of Sciences in Budapest and eventually made my media artist MA at the Academy of Fine Arts in Budapest in 1998. From 98 till 2001 I worked in the Budapest based Balázs Béla film studio as a curator-producer, mostly working on documentary projects. From 2001 to 04, I was a member of the leaders’ committee of the Young Artists Studio Association, the main artist-run organization for fine artists under 35 in Budapest. In 2004 I started a postgraduate DLA course at the Budapest Academy of Fine Arts which also involved a temporary teaching position at the Intermedia department of the same institute.
Since the end 90s I have been mostly making project based art in collaboration with Scottish artist Dominic Hislop in the artist group Big Hope (www.bighope.hu). Beyond that I have been working on videos, publications, giving presentations and leading workshops. Besides all this, I support myself by doing translations. My work in this field includes the Hungarian translation of Noam Chomsky’s and Guy Debord’s books. I live and work in Budapest.

IN THE FRAMEWORK OF :
Projected Visions – Hungary