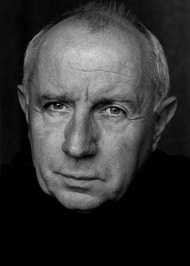 Paul Virilio is a French cultural theorist, urbanist, and “philosopher of speed”. He is best known for his writings about technology as it has developed in relation to speed and power, with diverse references to architecture, the arts, the city and the military.

Paul Virilio was born in Paris in 1932 to an Italian communist father and a catholic Breton mother. He grew up in the northern coastal French region of Brittany. The Second World War made a big impression on him as the city of Nantes fell victim to the German Blitzkrieg, became a port for the German navy and was bombarded by British and American planes. The “war was his university”. After training at the École des métiers d’art, Virilio specialised in stained-glass artwork, and worked alongside Henri Matisse in churches in Paris. In 1950, he converted to Christianity. After being conscripted into the army during the Algerian war of independence, Virilio attended lectures inphenomenology by Maurice Merleau-Ponty at the Sorbonne.

In 1958, Virilio conducted a phenomenological inquiry into military space and the organization of territory, particularly concerning the Atlantic Wall—the 15,000 Nazi bunkers built during World War II along the coastline of France and designed to repel any Allied assault. In 1963 he began collaborating with the architect Claude Parent and formed the Architecture Principe group. (Among the small group of interns were the architects Francois Seigneur and Jean Nouvel.) After participating in the May 1968 uprising in Paris, Virilio was nominated Professor by the students at the École Spéciale d’Architecture. In 1973 he became Director of Studies. In the same year, Virilio became director of the magazine L’Espace Critique. In 1975 he co-organized the Bunker Archéologie exhibition at the Decorative Arts Museum in Paris, a collection of texts and images relating to the Atlantic Wall. Since then he has been widely published, translated and anthologised.

Since 1998, Virilio has taught intensive seminars at European Graduate School. His latest projects involve working with homeless groups in Paris and building the first Museum of the Accident.

Lindemann battery in the Strait of Dover BUNKER ARCHEOLOGY, 1975