In the years 1995-1999 Monika Wiechowska studied photography at the Gerrit Rietveld Academy of Art and Design in Amsterdam. Shortly afterwards (2002) she graduated from Rijksakademie Van Beeldende Kunsten in Amsterdam. With her photographic works she took part in many international collective shows in Holland, France, Poland and Austria. In 2003 she has presented her works within an individual show at the Fotohof Gallery in Salzburg.

The image of a woman in an erotically expectant pose (I, photo, 2002) exposing her privacy in a domain where everything (including privacy) is for sale, is shifting the focus of attention from the work to the situation. A single photograph functions as catalyst for thought, reflection and critical attitudes.
In her last series of works rambling around in the spheres of individual and cultural memory, the artist brings about the metaphor of a garden (Garden in Skoki, photo, 2003). The mythical time of innocence, lost in the initiation of cognizance, returns in the sentimental convention of a bucolic. Arcadia is still present; it summons us with the secret perversity of virginity lost. Wiechowska invites the viewer to make the effort to read the semantic beauty of reality both through his or her own experience and sensitivity, and in the light of cultural and artistic consciousness. 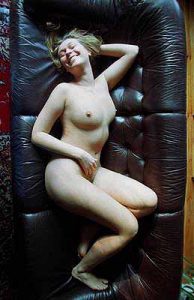