During one day Peter Weibel occupies the Celebration Hall of the Rhine Palace in order to deliver his vision of Europe through three poignant installations: 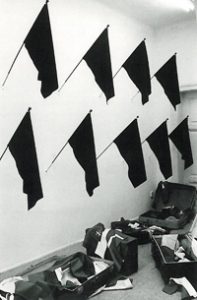 Europe is a mask. Europe is a bureaucratic and economic idea. Europe is not a political and human idea. The myth of birth of Europe is rape (Zeus) or migration (Aeneas). Europe exported colonialism and death. Genocide is Europe’s program. The sleep of Europe generates monsters. When will Europe awake? 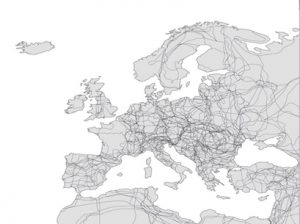 The borders of Europe are changing constantly along the centuries. Big empires collapse. Small empires grow for a short period of time. Nomads conquer diverse parts of Europe. Tribes and nations disappear. Religions expand or vanish. Political regimes grow or shrink. This computer generated video shows the transformations of Europe over a period of 2 000 years. Europe looks like an agglomeration of cells. The cells (nations) are coloured. Europe looks like a coloured field of growth patterns, like a game of life. Cells die and grow, cells move and stay. Looking back at the constant transformation of the inside states of Europe, we realize that in the future Europe will keep changing and that the momentary states of Europe will not remain. And this is precisely the strength and power of Europe: to rewrite itself. 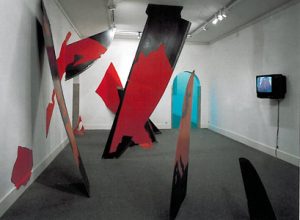 Huge knife blades (made of steel plates) are penetrating brutally the space and are partly painted with red paint. Walls are likewise partly painted with red paint. From a fixed location, where the video camera is positioned and records the spatial ensemble, the map of Europe is construed from the single patches of color. The image, so construed, is transferred to a screen (live). The European map appears on the screen as simplified and monochrome, the political borders are not drawn in. The real space in which the observer can move, is divided and dissected, but the imaginary image (the screen of ideology) Europe is united as a TV mono dream culture. The visitor sees himself in the image as dissected.