Facing the sea, arms outstretched, Tadeusz Kantor creating his “panoramic happening of the sea” near Osiek on 23 August 1967. The picture of this ‘maritime concert’ by the Polish protest artist is loaded with symbols and metaphors which doubtless reveal the wish to question the places and the methods of creation while proposing a new way of looking at Europe and its culture.

“Windows upon Oceans” is a series of events put together by the 5 members of the ARTVENTURE – Visual Art Network. The idea feeding the project is to perceive European space from its coastline, to conceive Europe and its cultural plurality starting from its seas and its boundary regions. (Michel Roux). Envisaging a new topology of our continent brought us to reflect on the artistic situations that result from it as the question of the limits of contemporary creation (Paul Ardenne).

With “Windows upon Oceans” our aim is to put in question the ideal city which, according to Plato, should be situated a long way from the sea and turn its back on those who come from the coast. Our approach attempts to contest this ideal space, this privileged place, the metropolis which develops sometimes in such a way that it obscures the presence of surrounding towns and their wonderful riches.

Our objective is to offer the public a cartographic concept based on projects imagined by exhibition curators and artists from unknown, unloved, scorned and even disreputable regions… We realized that the artistic creation taking place on the margins of the centralizing and globalizing system affecting a large part of cultural structures is far from lacking in interest. Moreover, this exclusion from the mainstream enabled some artists to develop a critical approach and alternative reflections. To take account of these differences is to really confront “something else”; it involves accepting to put our own values to the test.

“Windows upon Oceans” is the result of research work carried out through prospection journeys and meetings with cultural operators along our European coastline. From the Baltic Sea to the Mediterranean, via the Black Sea. But not only. The activities of the network reserved a special place for artists, exhibition curators and art critics who envisage artistic creation as a means of surpassing, of reaching out beyond.
In fact, we took a long look at the question of frontiers – boundary spaces, minority territories, zones of invasion, places of exchange and conflict, the history of migrations. The seas, for us, through their swell and constant ebb and flow, are reminders of the movements of artistic mobility and the agitation in contemporary creation which unceasingly question our world and confront the challenge of innovation.

A frontier, both emblematic and symbolic as it was, the Berlin Wall was doubtless the most relevant illustration of the preoccupations we have just mentioned. 20 years after its fall, can we really affirm that all the mental, cultural, spiritual, social, economic frontiers, have all fallen too? How do the generations of artists who lived at the time of the wall and those who came ‘after’ experience, neglect or deal with these situations?

Beyond any nostalgic commemoration, there is the need to reflect on our society, our daily life, our systems of thought, of government and their capability or incapability of confronting and handling life after the fall of the Berlin Wall. 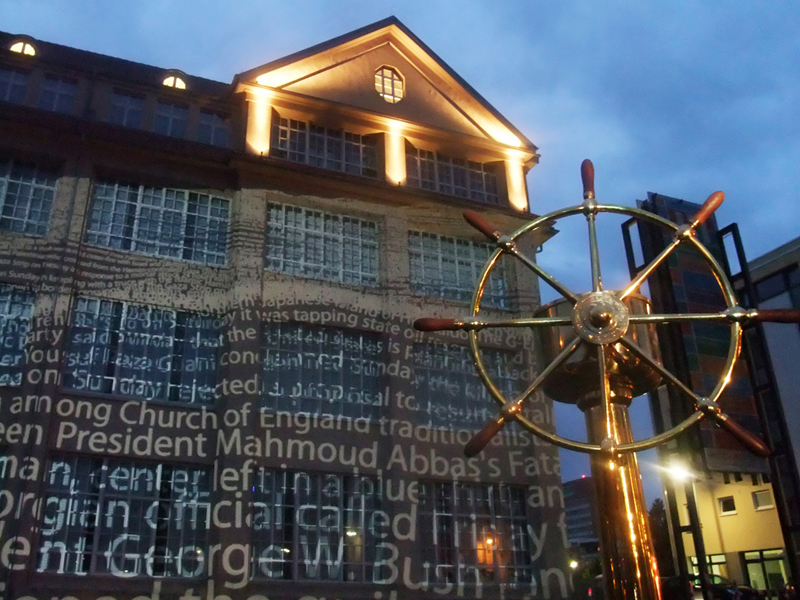 Michael Bielicky and Kamila B. Richter

Columbus 2.0 is an interactive navigational system that transforms the Google news into information waves forming an illusion of dynamic wavy 3D text space reminding us of an ocean.

The users have the opportunity to steer the ships steering wheel and so navigate through the information sea and experience the limitless information tsunamis and imaginative borders between different languages of the world.

The appearance and disappearance of those languages in the information sea reminds us also of our own history in which the presence or absence of a language always indicates the rise, fall or even extermination of a culture in different times and places.

Columbus 2.0 is an uncertain journey of a human kind through the past, presence and the future. 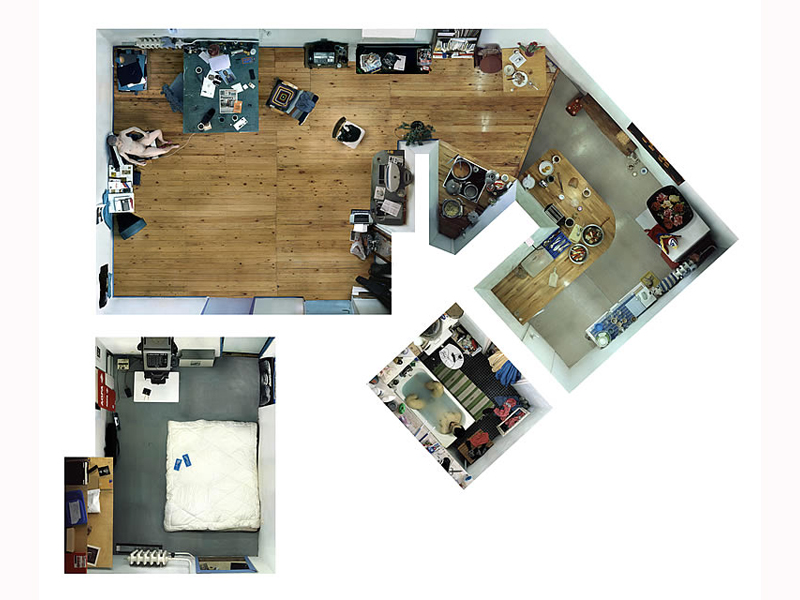 In  “Plan”, the space is  “reconstructed” by the artists, on the basis of the real architectural plan, photographed from above.

This voyeuristic perspective brings the essence of an authoritarian system to light, where individuals and private space are superseded by the collective and public space.

The purpose of this  project is to find out if this symbolism lives through time and still reflects the grip of power on human liberties, 20 years after the Fall of the Berlin Wall.

Ibro Hazanovic’s exhibition “Impasse”, especially conceived for “Fenêtres sur Mers, Mur de Berlin 20 ans après…” and the artistic space Insight, presents works of art which are tackling the problematic of identity through the notions of limits and borders.

In this exhibition the borders are considered as a dead end, a space without exit, where there is no opening and where a person finds himself in an uncomfortable position.

Beginning with quotations, installations, videos and objects, Ibro Hazanovic tries to define his own identity, which is closely linked to Balkans. His memory embraces the troubled history of that fragmented and complex region. The works of art which are presented, are above all the reflection of a plural, evolutionary and multiple identity supported by Ibro Hazanovic.

Based on a critical analysis of the artists’ situation and of contemporary creation’ s system in Central and Eastern Europe’s countries, the collective IRWIN, in collaboration with many artists and art critics came up with the idea of “EAST ART MAP”.

Born with the intention to distance itself from the systematized model of artists’ classification on the basis of their nationality, “EAST ART MAP” was conceived as a real artistic cartography mainly based on an innovative, coherent and unified organisation.

Novelist, poet, video-maker, sculptor, editor, moviedirector… Artur Klinov multiplies the forms of expression, necessary for the dissemination of his ideas and his concepts.

The artist conceives his architectural works of art in the same way that he apprehends society: an Ambiguous combination of intentions and materials.

The imposing character of his sculptures, erected in a few days, reminds us of authoritarian systems which control citizens’ life, freedom restrict, but also the vanity of a power in perpetual search of symbolism.

The straw, the material that the installation, presented in the space of “Chaufferie”, is mainly made of, gives us also the opportunity to think about the concept of appearances. A real sparkle of gold and light, revealed by the sun, the straw is in reality nothing more than a simple mass of dust without any real value.

“Being accepted”, a real autobiographic narration is an installation elaborated by Anila Rubiku, based on contrasts of shadows and light, on confusion between the interior and exterior, between construction and destruction.

Neighbours’ regular visits, the strong bonds that unite the people who live in the same neighbourhood, solidarity, the days of embroidery between friends… are the strong elements of the Albanian society, deeply ingrained in the artist’s memory.

All those memories who are being revived during the process of creation, are guiding her artistic development and the plastic forms she chooses.

If the electric lamp lights the little houses, it also sheds a light on an authentic vision of the Albanian society during the time of the exhibition.

From an anthropological perspective, Anila Rubiku’s creations, gives us the opportunity to understand and to apprehend the Man through his environment and his

“The Switch is based on a performance, which took place in Vienna. In the center of the action is an old socialist building, “the Karl Marx Hof”, built between 1927 and 1930. The structure is impressively more than 1 kilometer long and an actor runs the length of the building during sunrise.

What is exciting to me are not the objects themselves, but the history and the significance of the scene. The Karl Marx Hof relates to a time of imagined utopia, transcended through the architectural style. I am not only interested in the representation of utopian life, but also the stark juxtaposition between the physical movement of the actor and the transition between night and day.”

Starting from 2001, our association apollonia, european art exchanges has set up an important project presenting european video art. It is called “Projected Visions”.

Within the framework of the event “Windows upon Oceans. Berlin Wall 20 years after”, it seemed important to us to show some works from our vast collection, those directly linked to the chosen thematic: questions of borders, of Europe, of identity, of the otherness of the artist, of the cliché “Eastern European artist” will be raised through these videos:

The works will be shown at:

The screenings are free for the public.