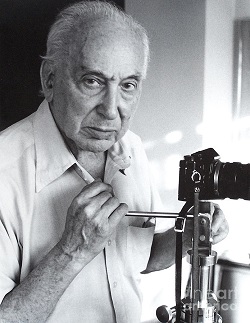 With Brassaï and Robert Capa, André Kertész forms part of a Hungarian trio of international renown. His career, debuting at Budapest where his photographs are reproduced in the papers, continues in Paris starting in 1925. From this period onward, in a capital full of excitement, he makes a name for himself with the critics and the artists of the avant-garde. The innovative experiments of the artistic community of Montparnasse, moreover, stimulate his own creative production. He is the first to reinvent a realism which had been overshadowed by the excesses of the pictorialist style. This reality of the photographed world is tinged in the case of Kertész with a conscious subjectivity, frequent high-angle shots, use of black-and-white, and luminous contrasts which emphasize the line. He publishes his reportages in magazines with wide circulation such as the Berliner Illustrierte Zeitung or also Vu, before settling in the United States in 1937, where he will only later receive recognition.

The Benefits of Emigration Hungarian : photography from the Nicephore Niepce Museum