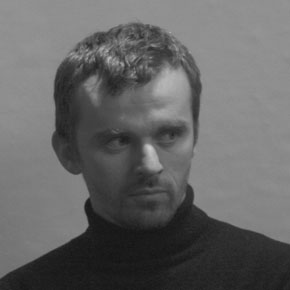 Born in 1973 in Brčko (Yugoslavia, today Bosnia and Herzegovina), lives and works in Prague

Igor Kovačević was born in Brčko – Yugoslavia, today Bosnia and Hercegovina. In 1992, he changed braking down multiethnic country Yugoslavia for blooming central European region. He received degree master of architecture and urban planning in 2000 at the Faculty of Architecture, CTU in Prague. Same year together with Yvette Vašourkova, he established architectural platform MOBA. In 2001, he cofounds Centre for Central European Architecture (CCEA). These two formations are linked through theoretical work and research projects. Focusing on Urban life and strategies they develop new forms of communication between architects, artist – specialist and city representatives. Long term research projects focusing on the urban phenomena are the core interest of the CCEA. Developing these projects as initiator or coordinator CCEA is looking for a new language in the bottom-up policies. In 2010, he finished his Ph.D. Studies on research – “Yugoslav architects educated in Czech Republic”.

His interest in urban life architecture and political aspects of the contemporary and future cities in Central Europe is developed in advisory boards and body side like Board expert of International Iakov Chernikhov Prize “Challenge of the time”. 2010 Moscow, Board of experts of the European Prize for Urban Public Space 2012, Independent expert of Mies van der Rohe Award for 2011-12. Since 2012, he is a member of the Metropolitan Board – an advisory body to the Mayor of Prague.

Igor Kovačević activities bring him to cooperation in the whole region and Europe, his lectures has been organized In Bucharest, Budapest, Vienna, Frankfurt and other cities in the region. He is authors of the texts and publications focusing on Central European architectural presence and history. As architect he and his team MOBA studio, developed more than 50 competition proposals there have been more than 12 prices and two realization from these competitions until now.