This duo of artists who invests both the field of visual arts (via painting, installation) and film, made from memory and imagination the heart of its work. The devices, often monumental, they realize are the result of pre-collection from inhabitants of a city or simple walkers. Madanov – graduated from film school and connoisseur of the history of philosophy and political ideas – and Terekbay – who studied languages and international relations – are archivists of memories or dreams of others, developing a form of conceptual art of everyday life not devoid of a political and social criticism. The Transgression installation consists of shelves on which are presented more than 300 small paintings from newspapers, magazines, or toys for use. Arranged such goods from a stall, these paintings represent symbols of our time. Presented in the pavilion of Central Asia during the 54th Venice Biennale in 2011, the work has been specifically configured for MAMCS’s spaces.

Transgression. 2007-2011 Installation of 250 paintings. Acrylic on canvas, cardboard; print on canvas An attempt to collect the “image of the world” from disparate fragments. (From the official website) © Photo: Haupt & Binder 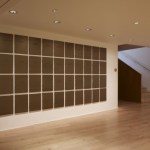 The Defragmentation of History, 2010 Exhibition : Between Heaven and Earth http://calvert22.org/artists/galim-madanov-and-zauresh-terekbay