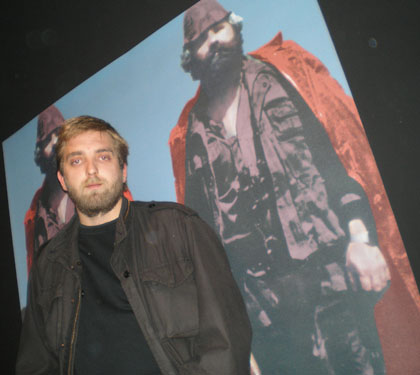 The video ‘Summertime’ is the kind of video where nothing happens. In the distance one can see a man walking slowly, not to say that absolutely nothing is moving. The camera is installed in one of the buildings of Prishtina, and it records an ordinary, even boring
view of Prishtina, Maliqi’s city. The view is so still that it is almost disturbing. And, at the same time, having in mind Maliqi’s previous work ‘I need a radical change’ (a work consisting of the above mentioned sentence, which was written in neon lights in the exhibition ‘I need a radical change’ in Galleria Nova, Zagreb, Croatia), the video could be seen in a different context. It accumulated a strange energy, where everything seems in the brink of exploding. This video is an interpretation from an artist who is living in peculiar situation, full of contradictions, and above all, in a society that has tremendous energy that can be used constructively. But, as one can see from the past, this energy could also be extremely destructive.

IN THE FRAMEWORK OF :
Projected Visions – Kosovo