Born in 1964 in Shymkent Kazakhstan, Meldibekov Yerbossyn lives and works in Almaty.

Like Almagul Menlibayeva, Meldibekov graduated from the Almaty Institute of Theatre and Arts. Firmly committed to a political art, Meldibekov makes sculptures, photographs and videos with disturbing almost violent imagery that force the viewer out of his torpor. Wielding both irony that the image-shock Meldibekov depicts the stormy history of Kazakhstan, relationships, no less complex, with the Western world and the place of the individual within the Great Story.
Firing on all cylinders, he poses two characters with a gun in the mouth in front of eqch other, he distorts the bust of Lenin whose thick lines reminiscent of Genghis Kahn, he turns the traditional decorative arts to create plates with military ornament, he deploys “family albums” in which he invites his family members to pose in places they visited decades ago where monuments have disappeared or changed. Under the brutality of his pictures or gestures can be read an aspiration to distance or lightness, a form of flight beyond the mediocrity of reality. 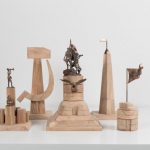 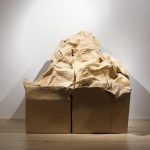 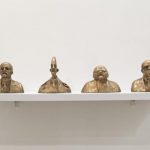