Nora Dumas is one of those rare photographers who, starting with the nineteen-thirties, chooses a specialization for herself. Residing in France from 1913 onwards, she is an assistant to Ergy Landau in her Parisian studio. After pursuing an interest in the nude, with strict adherence to the lessons of her compatriot, then concentrating on the photography of animals, Nora Dumas will dedicate herself to rural French life, creating portraits which are rustic to say the least, taken in the countryside of the Île-de-France. Making use of narrow framing and a pitilessly sharp focus, her photography bears witness to the daily life of a peasantry which will be considerably transformed by technical progress. These images will be widely distributed by the press. Along with Brassaï, Landau and Kertész, Nora Dumas will thus contribute to establishing the “humanist” vocabulary which will have its heyday after the war. 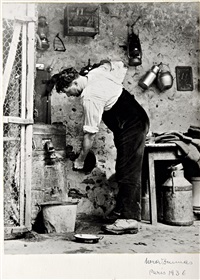 The Benefits of Emigration Hungarian photography from the Nicephore Niepce Museum