Writers, visual artists (working installation, photography, video) and independent commissioners, Elena and Viktor Vorobyev form a duo of artists appeared on the contemporary scene from the 1990s. Their approach in which the viewer sees directly challenged or pushed, borrows conceptual art and is not devoid of a certain humor. They are famous for their “blue period”, during which all of their work is of the color selected for its spiritual connotation (in reference to the heavenly gods Tengrism initially dominant religion then blue vaults of the mosques, where Islam sets), but also because it symbolizes the country’s independence: When the Soviet Republic falls, the red flag gives way to Kazakh blue. Bazaar project began in the 1990s, it evokes a time when the sale of personal items has become for many a means of survival: evoking the stands, snatches of conversation, bargaining, facility is located at the crossroads of individual destinies and Great History.
Necessary additions is as a series of graphic variations, poetic, humorous, from old passport photos used for the official documents of the Soviet era.

In 2015 Aspan Gallery has staged Vorobyevs‘ mid-career restrospective The Artist is Asleep at the A. Kasteev Museum of Arts, Almaty, curated by Viktor Misiano. 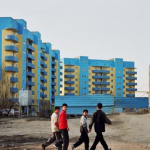 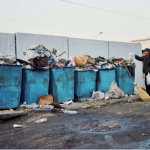